It has been revealed that Arsenal face a hefty transfer fee if they want to complete the signing of Barcelona striker Tonny Sanabria. 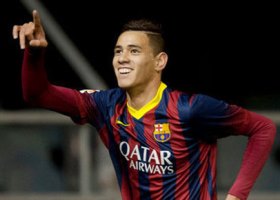 The Mirror reported that Arsenal will have to pay a staggering £3.6 million to sign Barcelona’s Paraguayan starlet Sanabria.

The 17 year old Paraguay international is wanted by the Gunners who have tracked the kid rated the next Lionel Messi because of his size and skills.

However Sanabria has a buy-out clause in his deal well above the amount that Arsene Wenger hoped to pay for the teenager.