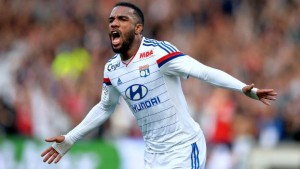 Will Arsene Wenger finally dip into the funds to secure one of the best attacking talents out there in Alexandre Lacazette?

Ligue 1 side Lyon have told the Gunners they must stump up to €55?million (£48.7?million) plus €12?million (£10.6?million) in add-ons if they want to land the France international this summer.

Fresh talks between the two clubs have taken place. The 26-year-old is a long-term target for Arsene Wenger, who tried to bring him to the Emirates Stadium last summer, and apparently a firm transfer target for the current transfer window.

Lacazette has spent his entire career to date with Lyon. He first joined his hometown club as a 12-year-old in 2003. He was given his break in the first-team by current Southampton manager Claude Puel in 2010 and has since gone on to score 129 goals in 275 games for the club.

Lacazette is set to start for France against England in this evening’s international friendly in Paris.