It has been reported that Newcastle United are yet to open talks with Ipswich Town for Tyrone Mings. 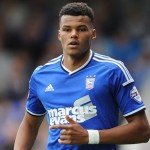 The Journal says the Magpies have been to watch Mings several times this season. However, there has been no contact between Newcastle and the Championship club about their promising defender.

Arsenal have also been watching the left-sided defender.

Mings is a former Southampton junior and rated among the best young players outside the Premier League. James McCarthy Urging Everton To Not Dwell On Arsenal Comeback

Arsene Wenger Insists Arsenal Have Nothing To Lose Against Bayern Munich We Will Respect Man Utd and Van Persie – Wenger