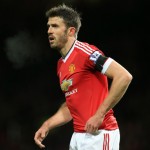 Reports have emerged claiming that Michael Carrick is yet to hear from Manchester United about a new deal.

ESPN says the England international’s contract expires this summer and has yet to be offered a new deal.

Carrick is considering moving abroad having struggled to make the starting XI after the arrivals of Morgan Schneiderlin and Bastian Schweinsteiger.

The Geordie has been linked with Newcastle United and Arsenal.