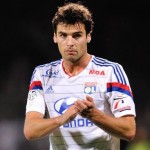 Reports are out claiming that the agent of Olympique Lyon midfielder Yoann Gourcuff can’t rule out a move away this summer.

The talented midfielder is a favourite of Arsenal boss Arsene Wenger and has also been watched by Newcastle United and West Ham United this season.

Didier Poulmaire said: “It’s not betraying a secret to say that there is interest from Rennes and Bordeaux. There are clubs in Spain, Italy, England, who are waiting to know the fate of the OL, whether they will be or not in the Champions League.

“Agents have reported interest to me from very big clubs.”