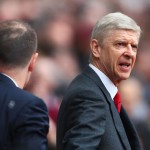 Wenger, though, insists they still need to finish in the top three.

He said: “The top four is not Champions League, just a place in the qualifying round.

“The top three is guaranteed, which is why it is so important.

“What has changed over the years is that the impact of the finances in the Champions League is not so great any more.

“For a period that money was vital for us.

“But the sporting impact remains the same because we want to be in the Champions League playing the top teams.” Arsenal Target Eden Hazard : Inter Milan Is One Of The Best!