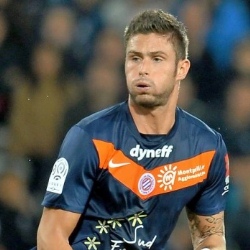 It has been revealed that Arsenal are not giving up on Montpellier striker Olivier Giroud.

The Observer reported that the Premier League giants will continue to scout Giroud over the season’s final weeks.

The 25-year-old’s goals have helped propel René Girard’s side to the top of the French league, but there is a release clause in his contract, set initially at €10m but rising with caps and Champions League qualification, that could be exploited. Arsenal, Chelsea Set To Do Battle For Marco Verratti