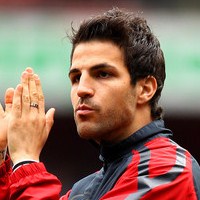 Reports have surfaced that Premier League giants Arsenal is not interested in selling Cesc Fabregas for a knockdown price.

The Sun has reported that the Gunner have told Real Madrid that the bidding for their club captain starts at £54million.

It is believed that Real director Jose Angel Sanchez contacted the London club hours after Arsene Wenger declared this week there had been no inquiries for Fab.

And the Spanish giants are ready to meet Arsenal’s demands in their determination to trump Barcelona.

A Real source told The Sun: “The president Florentino Perez has identified Fabregas as the one signing above all others to hurt Barcelona.

“He believes signing Fabregas would be a real statement of intent for next season. He will do whatever is needed to put the club back above Barca.”