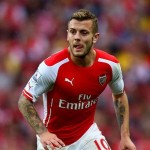 Reports are out claiming that Arsene Wenger has made it vehemently clear that Arsenal are not about to sell Jack Wilshere.

It was suggested that Manchester City are in pursuit of the 23-year old midfielder but Wenger has moved quickly to rubbish such speculation by saying the England international is going nowhere.

“You can imagine my answer,” said Wenger.

“You have enough experience. We are not in a position anymore where we have to sell our best players.

“We cannot make a case of any headline in any newspaper in a press conference from things that are not true.”