Reports are out claiming that Arsenal are determined to keep hold of defender Nacho Monreal. 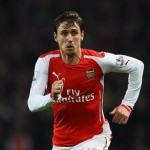 The Daily Mail says Arsenal will resist any offers for Monreal this month after Athletic Bilbao enquired about the defender.

The La Liga club have shown an interest in the Gunners’ versatile defender, but were told he will not be leaving the Emirates Stadium.

Monreal has been an important figure for Arsene Wenger’s side this season, playing regularly at central defence and left-back for the injury hit Gunners.