Reports are out claiming that Arsenal manager Arsene Wenger insists the club will not be sending youngster Jeff Reine-Adelaide out on loan this coming season. 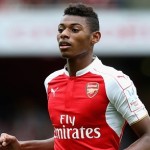 The 17-year-old featured in the Gunners’ 1-0 win over Wolfsburg in the Emirates Cup on Sunday, impressing in an attacking midfield role.

Wenger signed Reine-Adelaide from Lens earlier this year but is keen to keep a close eye on his development feather then farm him out to a lower division club during the 2015/16 campaign.

“He will definitely be here,” said Wenger after the match.

“He is 17 years old and looks very promising, but he needs to work with us now for a year with the first team, to play with the U21s and develop. There is a fantastic potential there and he will stay with us.”

Of the French starlet, Wenger added: “In some situations, of course, he has the game of a 17 year old, but on the other hand he has shown great potential as well.

“He looks very advanced physically and I’m sure that he has learnt a lot from these two days.” Alex Oxlade Chamberlain Determined To Be Fit For The World Cup