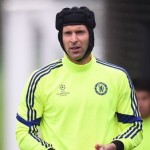 Reports are out claiming that Arsenal boss Arsene Wenger insists he’s not in talks for Chelsea goalkeeper Petr Cech.

The Mirror reported that the 32 year old could be allowed to leave Stamford Bridge after losing his place to Thibaut Courtois.

That has alerted the Gunners who were keen on signing the keeper before he went to Chelsea and Wenger remains a big admirer.

But when recent links to Cech and stories were put to him, Wenger snapped: “no” when asked whether there was any truth in Arsenal signing the Czech keeper.