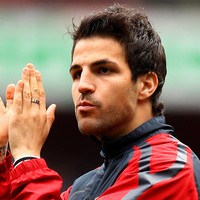 Arsenal have made a massive new contract offer to Cesc Fabregas.

According to The People, the Gunners have made a last-ditch attempt to keep Cesc out of Barcelona’s clutches by offering him a £14million, two-year contract extension which would keep him at the club until 2017.

However, their big-money offer will be snubbed by the Spaniard, who has made up his mind to quit the Emirates this summer.

Fabregas, who did not travel on Arsenals pre-season tour to Asia because of a hamstring injury, will give manager Arsene Wenger his decision this week.

Barcelona’s wage offer of £2.5m a year means he would be taking an £85,000-a-week pay cut but Fabregas would prefer to go home and win trophies with the best team in the world.

Barca are still working on their offer, but club sources have revealed they will not now go above £34m. Leicester Boss Claudio Ranieri Insists All Pressure Is On Arsenal