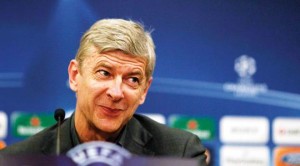 Arsenal have opened negotiations with Arsene Wenger with a view to extending his contract.

Wenger, who is widely expected to be handed a £70m transfer kitty to spend on players, has been linked with a move to PSG, with current incumbent Carlo Ancelotti tipped to occur the Real Madrid hot seat.

Gunners chief executive Ivan Gazidis lavished praise on Wenger last week, insisting he is the right man last week, saying: “We think we have got a fantastic manager.

“We hope that he wants to do what he is doing for the long term. I believe he does.

“We have got a lot of confidence in Arsene that he is the right person to take the club forward and I think he will want to do that.”

Having appointed Sir Chips Keswick as their new chairman, following Peter Hill-Wood’s resignation, it is believed he will be able to provide the necessary support mechanism to end Arsenal’s trophy drought.

Wenger has big plans, and is looking to make Gonzalo Higuain his first signing of the summer, as a deal for Stevan Jovetic appears to have fizzled out.

The Frenchman, who has been in charge of the Gunners for 17 years, sees his current contract expire next season.