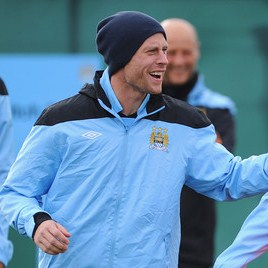 Reports have emerged that Wayne Bridge could be on his way to Arsenal after Roberto Mancini told him it is time to leave Manchester City.

The £90,000-a-week full-back is unwanted at the Etihad and the Gunners are favourites to pounce.

Boss Mancini said: “It should be important for a player to play football. I don’t know why someone would want to stay when they know they cannot get in a team.

“I hope he will go. It’s difficult for a player to stay here every day then, on a Saturday, nothing. When we are here he trains with us and, sometimes, he trains with the young players.”

Former England left-back Bridge, 31, has not started a Premier League game for City since October 2010.

Bridge turned down SPL giants Celtic this summer and several Championship clubs have asked to take him on loan.