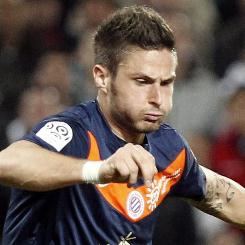 Arsenal have opened talks with Montpellier for their star striker Olivier Giroud.

The Daily Mail says Montpellier owner Louis Nicollin rates Giroud, 25, at £50million but it is understood he has a £12.8m release clause.

Wenger could use Marouane Chamakh as a make weight in any deal.

Giroud scored 26 times as Montpellier won Ligue 1 but seems certain to leave after Euro 2012. He has already spoken with Bayern Munich.