It has been revealed that Arsenal have reportedly opened talks with Borussia Monchengladbach’s Granit Xhaka. 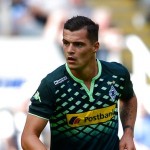 According to German publication Bild, Gunners boss Arsene Wenger has held discussions with both the Swiss midfielder’s father and his agent regarding a potential summer transfer.

Xhaka, 23, is under contract with Gladbach until the summer of 2019 but has made no secret of his plans to one day grace the Premier League with his presence and the chance to join Arsenal may be too good to turn down.

The North London club are preparing themselves for the departures of central midfielders Mathieu Flamini, Thomas Rosicky and Mikel Arteta and are hoping they can lure former Basel star Xhaka to the Emirates Stadium in the coming transfer window.