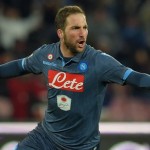 Reports have emerged claiming that Arsenal have commenced negotiations with Gonzalo Higuain.

The Daily Star suggests that the Gunners are again showing significant interest in the Argentina international who they pursued in 2013 while he was with Real Madrid.

It is believed that Higuain is unhappy in Naples and is keen to leave the Stadio San Paolo in the summer in order to gain Champions League football.

Higuain’s father and agent Nicolas has stated that the striker, who has also attracted interest from Liverpool and Manchester United, will not be leaving Napoli at the end of the campaign but speculation continues to grow. It’s Important For Arsenal To Be In The Champions League! – Sanogo