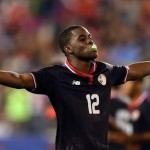 Reports are out claiming that Joel Campbell inspired Costa Rica to a memorable 1-0 victory over the United States on Tuesday.

Campbell has been left out in the dark at club side Arsenal but he firmly remains a key player for Costa Rica and the striker continued his fine run for the national team by guiding his side to victory against USA in a friendly clash at the Red Bull Arena.

Campbell scored the only goal of the meeting in the 70th minute and following the game, the 23-year old dedicated his goal to his daughter.