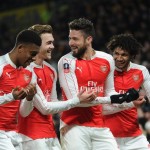 Reports are out claiming that Arsenal owner Stan Kroenke says the squad will spend preseason in the US.

The American tycoon appeared at a press conference on Friday to announce that the Premier League side would be spending time with his NFL franchise, LA Rams, during the pre-season.

Kroenke is hoping to boost the profile of both Arsenal and the Rams in the US, and believes that an appearance in North America will do that.

He told a press conference in Boston: “Arsenal will come back [this summer] and they’re playing and training in Southern California this summer for the first time.

“So that’s all good. That will raise the profile of the Rams and Arsenal in North America.

“I mean the Rams are, they’re noteworthy over there because of Arsenal and all that plays.” Per Mertesacker Confident Arsenal Will Bounce Back Against Man City