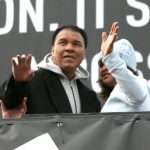 Ali won the fight in the sixth round, and Friar has fond memories of the evening.

“The fight was probably one of the most momentous evenings ever. It was an electric night, the weather was great and we had everybody there.

“We had all the film stars in, we had George Raft, Diana Dors, Rocky Marciano – it turned out to be an amazing evening, especially with the way the fight turned out. Poor Henry, who I became very friendly with in later life, was cut to pieces but there was hardly a mark on Muhammad Ali.

“I met Ali – I was very fortunate there. He was awesome in a word, he had charisma beyond belief and everything about him exuded fame.” Nacho Monreal is a perfect fit for Arsenal – Cazorla