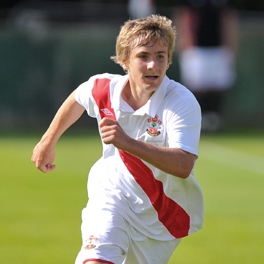 Interesting news are out and it has been revealed that Arsenal are planning another raid on Southampton’s academy.

The People revealed that the Gunners are ready to raid Southampton for their THIRD whizkid – 16-year-old left-back Luke Shaw.

After taking Theo Walcott and Alex Oxlade-Chamberlain, boss Arsene Wenger has had his spies tracking the England youth cap for a year.

Shaw made the bench in midweek on Carling Cup duty. I Don’t Miss Any Of Arsenal’s Games! – Cesc Fabregas