According to reports from the Daily Mail, Arsenal are planning a surprise January move for Dimitar Berbatov. 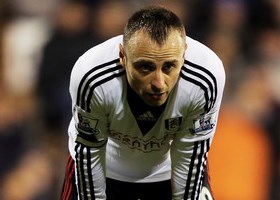 The former Manchester United striker is being linked with a winter exit from Fulham with the Gunners ready to offer him a short-term deal.

It is said that Arsene Wenger wants some attacking quality to add to Olivier Giroud and the injured Lukas Podolski and may look to bring the Bulgarian to the Emirates Stadium next month for a minimal fee.

The 32 year old, who has six months left on his Fulham contract, has been in fine form for the Cottagers in their most recent Premier League outings against Tottenham (2-1 loss on Wednesday) and in the 2-0 win over Aston Villa on Sunday.

Arsene Wenger Insists Arsenal Not Giving Up On Luis Suarez