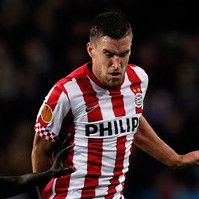 Reports are out claiming that PSV Eindhoven midfielder Kevin Strootman is a target for Arsenal.

The Telegraph reported that with Abou Diaby’s season again hampered by injuries, Arsenal could also do with added solidity in midfield and Strootman, who plays for PSV Eindhoven, is regarded as one of the best young holding players in Europe.