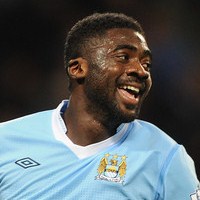 Sensational news are out and it has been revealed that Arsenal boss Arsene Wenger is considering a shock move to bring Manchester City defender Kolo Toure back to the club.

The Daily Mail has reported that Wenger is poised to solve his defence headaches by making an audacious swoop to re-sign the Ivory Coast centre back.

The Gunners boss was understandably delighted with the manner in which his team beat Chelsea 5-3 at the weekend, but the result could not mask the number of errors made by the back four.

New recruits Andres Santos and Per Mertesacker both featured at Stamford Bridge, but we’re guilty of defensive naivety as the Blues bagged three goals.

And Wenger could now make a move for the unsettled Ivory Coast international who is no longer a first-team regular at the Etihad Stadium after failing a drugs test.


David Beckham Urged To Stay Involved In The MLS