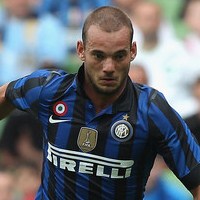 Sensational news are out and it has been reported that Arsenal are making a shock move for Inter Milan midfielder Wesley Sneijder.

Gazzetta dello Sport has reported that the Italian giants still want to sell Sneijder, with Manchester United stalling on making a new offer for the Dutch international.

Arsenal boss Arsene Wenger, flush with the cash from the sales of Samir Nasri and Cesc Fabregas, is now being linked with a stunning move for the former Real Madrid star.

Gunners skipper Robin van Persie would welcome the arrival of his countryman, though personal terms could prove an issue.

“(Inter president Massimo) Moratti told me that he costs too much, we talked on the phone, but Inter does not have €32 million.” Ashley Cole Was Supposed To Be Next Arsenal Captain! – Patrick Vieira