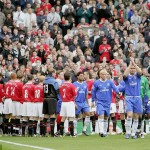 their former captain, Robin van Persie — a guard of honour when they meet at the Emirates Stadium on Sunday – but they are still expected to perform the honour.

A guard of honour is a tradition in games involving teams who have just won the title. Privately, a number of Arsenal players have expressed objections towards the gesture, particularly in front of their own supporters, but it is understood it will still go ahead.

Arsenal’s pain will be offset by a £1.5million bonus they will receive due to a clause inserted in Van Persie’s contract when he signed last summer. The clause was activated when United won the title.