Reports are out claiming that Arsenal players face huge pay-cuts if they fail to qualify for the Champions League. 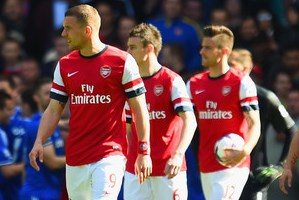 The Daily Star reported that players face a pay cut of up to 25 per cent if they fail to qualify for the Champions League for the first time in 17 seasons.

Arsenal, when negotiating new deals this season and last, asked stars to agree to the reduction in wages.

While some successfully refused, it is believed there are squad members who signed up for the clause, with the club believed to have argued it was unlikely to come into effect.

Making it into Europe’s top club competition is worth a minimum £35m, but the Gunners look in a battle with Everton to secure fourth place this season.