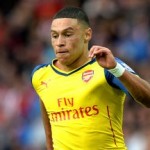 Alex Oxlade-Chamberlain has admitted that Arsenal must not be complacent going into their clash with Champions League opponents Anderlecht.

The Gunners looked to be heading for a second group-stage defeat in Brussels last month until they pulled off a remarkable comeback in the dying minutes to win 2-1.

“If we hadn’t have got that result it definitely would have left us with a lot to do and a tricky few games coming up,” the Ox told arsenal.com.

“It was a really important game for us and that result was really crucial because, without a win there or at minimum a draw, we would have been left right in it with a tough uphill climb.

“Winning that match does leave us in a more favourable position for the last few games coming up. Galatasaray and Anderlecht will be looking to get as many wins as they can so they won’t make it easy for us at all. That game away against Galatasaray won’t be easy either.

“The main thing for us is to focus on the next one against Anderlecht, so we need to make sure we go into that game and focus. We don’t think we’re out of the woods by any stretch of the imagination.”