It has been reported that the love scandal engulfing Arsenal midfielder Mesut Ozil has seen girlfriend Mandy Capristo reportedly move out of his London home. 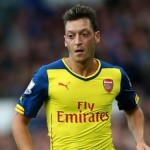 The Sun reported that Mandy reportedly moved out of his London home just a week after the Arsenal star was accused of ‘muscling in’ on another woman – with a removal van pictured outside the house on Friday.

The Arsenal man is out until the end of 2014 with a knee ligament injury and he has reportedly been given a double blow with the news Capristo has moved her stuff out if his home.

Removal men were pictured outside of Mesut Ozil’s London home on Friday, appearing to move furniture