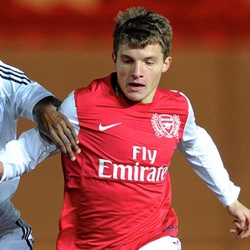 Reports are out claiming that Arsenal reserves coach Neil Banfield was pleased with Thomas Eisfeld’s debut in their win over Swansea City.

Eisfeld was in action for Arsenal barely 24 hours after signing from Borussia Dortmund.

Banfield told arsenal.com : “I am delighted with young Thomas. He was a little bit nervous as he doesn’t know anybody, but he has settled in great. At half time we decided to take him off – he got a little knock on his knee, so there was no need to take any chances. He had a good 45-minute run out.”