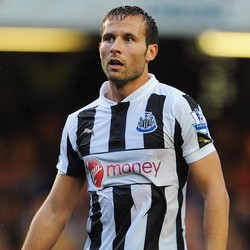 The Daily Mail revealed that the Gunners are considering a £15million move for Newcastle midfielder Cabaye as Wenger looks to bring in two players this week.

Though the Arsenal manager ruled out a move for Cheick Tiote, his clubmate Cabaye is understood to be on a list of targets.

Newcastle have yet to receive a bid for Cabaye. However, an offer of £15m may not be enough as there is little time to bring in a replacement.