It has been reported that Arsenal are scouting Celtic midfielder Nir Bitton. 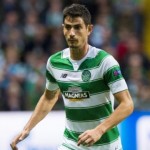 The Evening Times claims that Arsenal have been sending scouts up to Scotland to watch Celtic star Bitton.

The Gunners have been keeping an eagle eye on the midfielder, who joined Celtic from Israeli Premier League side FC Ashdod for £700,000 in 2013.

The Israeli has fast become a mainstay in the Hoops’ midfield and his performances have attracted the attention of Arsenal boss Arsene Wenger. Arsenal Boss Wenger Confirms Wilshere Will Not Be Back Before February