It has been reported that Croatia midfielder Marcelo Brozovic is being scouted by Arsenal. 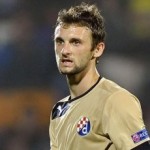 The Mirror claims that Dinamo Zagreb midfielder Brozovic, 21, played in Croatia’s 1-1 draw with Italy and now the Gunners must decide whether to press ahead with a move.

AC Milan and German clubs are also interested but Arsenal have been long term admirers.

Gunners boss Wenger wants a deep-lying midfielder and is keen to strengthen his squad in January and next summer. Arsene Wenger Grateful For The Backing Of Owner Stan Kroenke