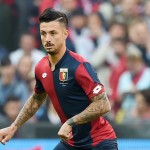 Reports are out claiming that Genoa defender Armando Izzo is being tracked by Arsenal.

Il Secolo XIX says the 23 year-old is being followed by the Gunners and Benfica.

Izzo’s agent, Paolo Palermo, said: “He’s in his second year in Genoa and is improving day by day.”

The defender came through at Napoli, but never managed to play senior football for the Azzurri.