It has been reported that Arsenal boss Arsene Wenger is weighing up a late deal for Wolfsburg midfielder Luiz Gustavo. 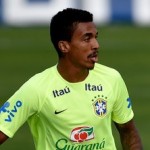 The Mirror reported that the Frenchman sent scouts to check on the Wolfsburg midfielder in their Bundesliga opener, a 2-1 defeat away to champions Bayern Munich.

It is said that Wolfsburg are keen on Arsenal forward Lukas Podolski – and that could even raise the chance of a player-plus-cash deal.

Arsenal nearly signed 27-year-old Gustavo last summer but the midfielder wanted assurances about playing regularly which Wenger was not prepared to give.