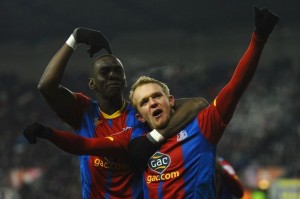 Wenger is desperate to win the race for the gifted midfielder in the summer – whether he helps the Eagles to reach the Premier League or not.

Williams has pushed his way into the Palace side this season and also made a major ­impression for Wales in the World Cup ­qualifiers.

The Gunners boss is determined to get the 19-year-old after losing out to Manchester United in the race for his team-mate Wilfried Zaha. United are also keen on Williams.

But Palace will be desperate to hang on to him if they go up. There is no love lost ­between Wenger and Palace boss Ian Holloway over the Zaha ­transfer saga and the Arsenal chief will not ­worry about stepping on the Palace boss’s toes to get what he wants.

Williams came off the bench to win his first Wales cap in last week’s 2-1 victory away to Scotland.

I am hoping for an England recall – Beckham