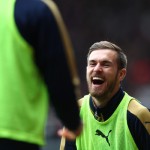 Reports are out claiming that Arsenal are willing to listen to offers for Aaron Ramsey.

The Daily Mail reported that Arsenal are ready to sell the majority of their British players this summer.

Ramsey’s long-term future at the Emirates Stadium is far from certain.

His place in the starting XI next season is under threat with Arsenal looking to bolster their central midfield ranks this summer.

Borussia Mönchengladbach midfielder Granit Xhaka is the club’s No 1 target in the position, while they also have a long-running interest in Real Madrid’s Toni Kroos.

Indeed, Ramsey could find himself marginalised next season. He has been utilised on the right wing for the Gunners over the last two seasons, but he prefers playing in a central role.