Reports are out claiming that Arsenal striker Joel Campbell is being linked with Newcastle United. 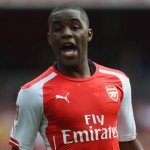 The Evening Chronicle reported that the Costa Rica international could be presented to United as a possible loan signing before the window shuts.

West Ham had been interested in bringing Campbell to Upton Park earlier this month but Sam Allardyce has since ruled out the switch.

Campbell is available on loan and while he does want to stay at Arsenal long-term, a loan move to a Premier League club is an option.