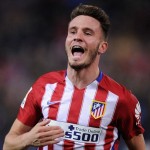 AS claims that Arsene Wenger will face a battle to sign the 21-year-old with Manchester United also known to be interested.

He is also contracted to Atletico until the summer of 2020, although his deal does include a £25m release clause.

The Spaniard has been a regular for Diego Simeone this season, making 32 appearances and scoring seven goals in the process.