It has been reported that Arsenal are eyeing Borussia Monchengladbach midfielder Christoph Kramer. 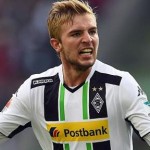 The German international is on-loan at Gladbach from Bayer Leverkusen.

The Daily Star claims that Arsenal are considering a £20m move for German midfielder Kramer if they fail to land Sami Khedira from Real Madrid.

According to reports in Spain, the Gunners have identified Khedira as their main midfield target.

However, the German’s situation at the Champions League holders is uncertain with a host of clubs including Chelsea and Manchester United eager to sign him.