Telegraphs reports that Arsène Wenger, the Arsenal manager, is determined to add another striker to his squad before next season and has been scouting Jovetic for more than a year. 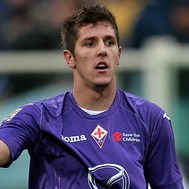 At 23, the Montenegro forward is regarded as similar in style and potential to a young Robin van Persie and would cost around £20million. Arsenal’s transfer record is the £15million spent on Andrei Arshavin but the club do have available funds, both from the sale of key players in recent transfer windows but also a new sponsorship deal with Emirates.

Arsenal attempted to buy David Villa from Barcelona during the January transfer window but will now turn their focus on younger and more long-term options.

Arsene Wenger Prepared To Welcome Back Cesc Fabregas To Arsenal