Reports are out claiming that Arsenal are planning to bid for Juventus striker Simone Zaza in January. 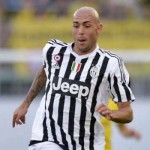 The Telegraph reported that Arsenal are prepared to spend £22m on Zaza this January.

Juventus may seek to offload the player if he fails to win a place in the Serie A champions’ first team.

Zaza only joined Juve this summer but faces competition up front alongside Alvaro Morata, Paulo Dybala and Mario Mandzukic.

And it is understood Arsenal would jump at the chance to sign the 24-year-old if he becomes available.