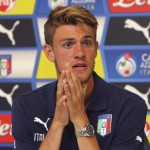 Tuttosport claims that Arsenal are keeping tabs on Rugani, who has been hailed as the best young player in Italy.

Arsenal are reportedly ready to offer £25m for the defender.

The 21-year-old has also been tipped to be reunited with former manager Maurizio Sarri at Napoli.