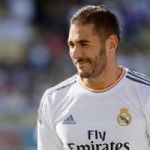 It has been reported that Arsenal boss Arsene Wenger is set to revive his interest in Real Madrid striker Karim Benzema.

The Gunners boss has been keen on the former Lyon star for some time now and is determined to lure him to North London for around £40million.

Arsenal have been after Liverpool’s Luis Suarez but have turned their attentions to Benzema with reports suggesting they will lodge a bid sometime this week.

Benzema joined Real Madrid in 2009 and has gone on to make a total of 184 appearance scoring 88 goals along the way.