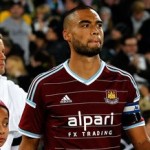 The Times reported that the 26-year-old defender is out of contract at the end of this season and is being monitored by the Gunners.

As of yet, however, Arsene Wenger has not made an official approach for the player.

The New Zealand international joined the Hammers in 2010 and signed a new two-year contract in April 2013.