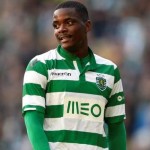 Reports are out claiming that Arsenal are determined to lure William Carvalho to the club this summer.

The Daily Mirror suggests that the Gunners are intent on landing Carvalho from Sporting CP and will offer Campbell as a sweetener.

The Lisbon giants reportedly want £21.5million for 23-year old defensive midfielder Carvalho but Arsenal feel they can cut that down if they throw Costa Rican forward Campbell into the mix.

The 22-year old, currently on loan with Spanish side Villarreal, joined the north Londoners from Saprissa in 2011 but has spent most of his time away from the Emirates with the likes of Lorient, Betis and Olympiakos. Nicklas Bendtner Confident Of Proving Himself At Arsenal