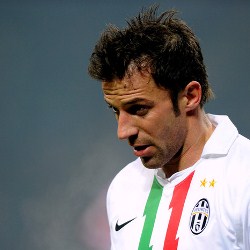 It has been that Arsenal and PSG are leading the race to sign Juventus icon Alessandro del Piero.

Gunners boss Arsene Wenger, following the success of Thierry Henry this season, sees Del Piero’s experience as a useful addition to his squad.

Del Piero’s brother and agent, Stefano del Piero, told ilSussidiario: “At this moment there is nothing new. However, all roads are open. There are no restrictions on what type of project is behind a proposal [to the player]. ”

“The type of football [exotic or European] does count, but the main interest is the project. So, all tracks are currently open.

“I think that after 20 years with Juventus and having given his availability to the club to sign a new deal since last February, it is now very difficult to remain in Italy.

“We are not close to anything, but I think it will be hard to remain in Serie A.”