Reports have emerged claiming that Gary Neville has heaped praise on Arsenal following their convincing win over Manchester United on Sunday. 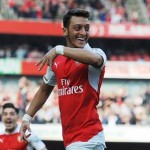 Arsene Wenger’s Gunners hammered the visiting Red Devils in the early stages of their meeting at the Emirates Stadium, scoring three goals inside the opening 20 minutes in the eventual 3-0 win with Alexis Sanchez netting a brace and Mesut Ozil also chiming in.

After the match, Sky Sports pundit and former United captain Neville spoke of the performance of the North Londoners who he feels were at their absolute best in dismantling the pre-round league leaders.

“From Arsenal’s side there’s still a job to do,” he said on the ‘Gary Neville Podcast’.

“The quality and the precision of the passing still has to be there; the speed, the weight of pass and the decision making.

“Everything was absolutely spot on from Arsenal’s point of view. It was as good as it possibly could be from Arsenal”

“I thought United were poor defensively, but Arsenal punished them so, so well.”