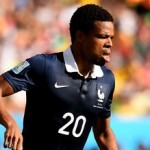 It has been reported that Arsenal are pushing QPR striker Loic Remy to drop his wage demands.

The People claims that Arsenal’s move for Remy is in danger of being scuppered by the striker’s £80,000-a-week wages.

Arsene Wenger is keen to land Remy after tying up a £30million move for Barcelona’s Chilean star Alexis Sanchez.

It’s thought Wenger will pay the £10m QPR want for Remy – but not his wages.